Warning: Parameter 1 to wp_default_styles() expected to be a reference, value given in /homepages/45/d435844064/htdocs/nacsi/wp-includes/plugin.php on line 601 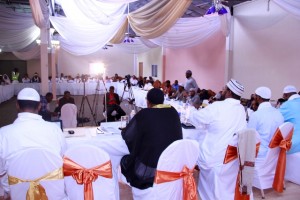 The North American Council of Somali Imams (NACSI) is an umbrella non-profit organization that was founded in early 2001 by the leading Muslim scholars of the Somali Community to meet the religious and social needs of the new Somali immigrants community.

The North American Council of Somali Imams (NACSI) is  dedicated to bringing together the Somali Community in North America  so they help one another, and depend on each other for the common good of the Somali community and the American society at large. NACSI draws its strength and guidance from the Holy Qur’an and the Sunnah of  Prophet Muhammad (pbuh)

The objectives of  North American Council of Somali Imams include but not limited to:

(b) Facilitating the sharing and exchange of resources, services, and expertise among the member organizations;

(c) Establishing new institutions and Islamic centers where needed, and maintaining the existing ones;

(d) Registering and owning the real estate properties and deeds of member organizations in the name of the corporation as “Waqf” (Trust) for protection and safeguarding;

(g) Deciding the sighting of the moon for the beginning of Ramadan and announcing Eid-ul-fitr;

(h) Organizing and managing fundraising activities for mosques and other Islamic causes in the USA;

(i) Resolving conflicts in mosques, and issuing  a final binding decision;